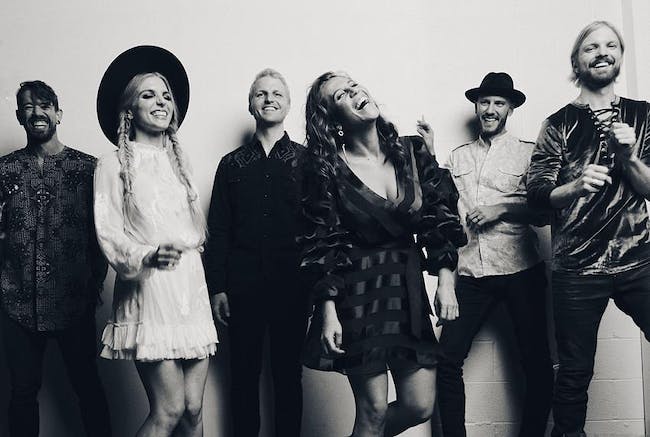 Earthy familial country outfit Delta Rae skillfully juggle gospel-tinged country-rock, sensual blue-eyed soul, and harmony-laden Americana, resulting in an infectious, radio-ready sound that falls somewhere between Nickel Creek and Adele. Formed in 2009 as a four-piece around the talents of siblings Ian, Eric, and Brittany Hölljes, along with Elizabeth Hopkins, the North Carolina-based band expanded to a sextet the following year with the additions of Mike McKee and Grant Emerson. In 2011 the group inked a deal with Sire/Warner Bros. after a particularly impressive in-office audition for Seymour Stein, who was blown away by Hopkins and the Hölljes siblings' powerful voices. The resulting Carry the Fire, their major-label debut, arrived in 2012. Carry the Fire reached 11 on the U.S. Heatseekers chart and 13 on the folk chart. Delta Rae released their second album, After It All, in the spring of 2015. In 2017, the band released an EP, A Long and Happy Life, which featured the hit single of the same name. ~ James Christopher Monger, Rovi