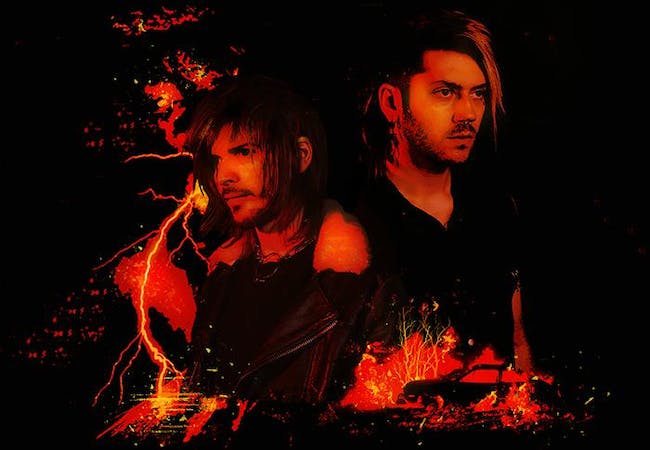 Ian Slider aka Space Laces is an electronic dance music producer who enjoys dabbling in many different genres such as dubstep, electro, house, trance, and drum 'n' bass. He originally started producing music under the name cornandbeans and shared his music via http://www.newgrounds.com. He allegedly abandoned the alias in 2008 and has since been working under the name Space Laces. Ian is well known among such bass music legends as Excision, Downlink, Datsik, Noisia, and Figure. His first official tune, 'Deep Space', was uploaded on his SoundCloud and later saw a release from Houserecordings on October 21st, 2011. The track properly delivered with its interesting and creative synths and sounds, as well as a sample from Carl Sagan. Ian later went on to remix Figure's 'Torture' which showed his true colors as a producer and defining his style and sound.

Unfortunately, disaster struck this up-and-coming producer. After years of work, Ian lost all of his music in a horrific hard drive crash. Sadly, his hard work could not be salvaged.

In 2014, still recovering from the loss of his work, he was asked to work on the Destroid Project along with Excision and Downlink. Space Laces was featured in 5 separate tracks on the 'Destroid - The Invasion' album, which gained him quite a lot of popularity as the project was well received. Later that year Space Laces collaborated with Excision yet again for another single for Destroid saga called 'Get Stupid'. The song received positive reviews and an official music video. He went on to officially finish his tune 'Digital Gangsta', a long awaited track he had originally dropped in the Going Quantum Podcast Mix [Ep. 86]. 'Digital Gangsta' was put out via Excision's label Rottun Records. Later that year, Ian unexpectedly teased a tune years in the making. The track was named 'Dungeons and Dragons' and was later given a free release via SoundCloud.

In 2015 he was featured on an bouncy bass-heavy collaboration with Excision entitled 'Push It Up', which was included on Excision's Codename X LP. After almost 2 years of the teaser of 'Say It Ain't So' was teased, Ian claimed he would give away to tune for free at 50K likes on his Facebook page. The tune was later released for free via SoundCloud.

In 2016, Space Laces was officially signed onto the legendary dubstep label Never Say Die, and its sister label NSD: Black Label. Soon after a new tune from Space Laces titled 'Bugbass' was released on the Black Label XXL compilation (mixed by Skism). 'Bugbass' originally titled 'bugbass_98' was the finished product of a demo leaked by Ian himself on the wizard of balls SoundCloud page, along with other minute-long demos. Said demos have since been taken down or privatized. The same year saw the release of an anticipated collab between Space Laces and Excision, 'Throwin' Elbows'. Before its official release, the song was played out by virtually everyone and was very well received. 'Throwin' Elbows' made its official debut on Excision's 'Virus' LP, alongside other signature Excision tracks as 'Virus' and 'Death Wish (feat. Sam King)'.

2017 finally saw the release of another highly anticipated Space Laces collab, this time with the vomit king, Snails. The song had been in circulation since 2015 and the two artists involved simply could not find time to finish it. In 2016 the demo of the song was leaked after an eager fan stole Skrillex's USB directly from the deck at one of his shows. The finished tune, which was titled 'Break It Down' now featured rapper Sam King. It was officially released on July 27th on OWSLA.

In 2018, an official music video was released on January 9th for the Space Laces & Snails collab, 'Break It Down (feat. Sam King)'. It was uploaded via the OWSLA YouTube Channel.

The creative mind of US electronic producer MUST DIE! is one that consistently amazes his fans worldwide. Since he began to gather attention across the bass scene in 2011, he has produced a wealth of original material and remixes, releasing on labels such as Never Say Die, Ultra, Dim Mak, Play Me, Mad Decent and Atlantic Records.

Using his naturally artistic and innovative musical intuition, MUST DIE! has quickly risen to recognition with his distinguished level of production. He tours extensively, and has supported the likes of Datsik, Excision and Zomboy to name a few. With a charismatic and outgoing personality alongside his technical proficiency, MUST DIE! will continue to grab attention over the coming months.